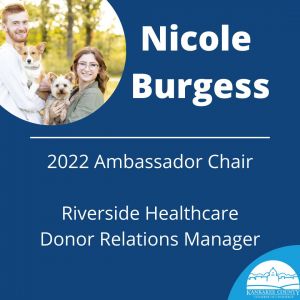 Since July, Nicole Burgess has stepped into the role as Ambassador Chair and has played a key part in the Chamber’s success in the last few months. Nicole is the Donor Relations Manager at Riverside Healthcare and has worked there since March 2021. Nicole works in the Foundation Office which deals with philanthropy for the hospital. She oversees fundraising and event planning for the Foundation. Her fundraising efforts help to make sure that the Kankakee County residents have access to the most advanced, high quality and accessible healthcare.

Nicole was raised in Beecher; she now resides in Grant Park with her husband and two dogs. She enjoys spending time with her family and dogs, loves to read, go for walks and takes on multiple home projects. Not only does Nicole love spending time in the community, but she also shoots competitive archery in her spare time.

Not being afraid to try something new, Nicole’s favorite quote is, “be a voice not an echo,” by Albert Einstein. Being a communication major in college, she has learned that every single person has a different story and perspective. Being shy in high school, she later found her voice, gained confidence, and learned new abilities through her time at Olivet Nazarene University.

Throughout the next year, Nicole looks forward to continuing to plan events for the Riverside Healthcare Foundation. She stated that she loves to learn and believes that other’s feedback and wisdom is essential to personal growth.

Within the last few months, Nicole has played an essential role as the Ambassador Chair at the Chamber. She continues to be the first person to sign up for events and always is the first to arrive and the last to leave. We appreciate everything that Nicole does and will continue to do for the Chamber. Her contribution is greatly appreciated, and we look forward to the next year with her as the Ambassador Chair.